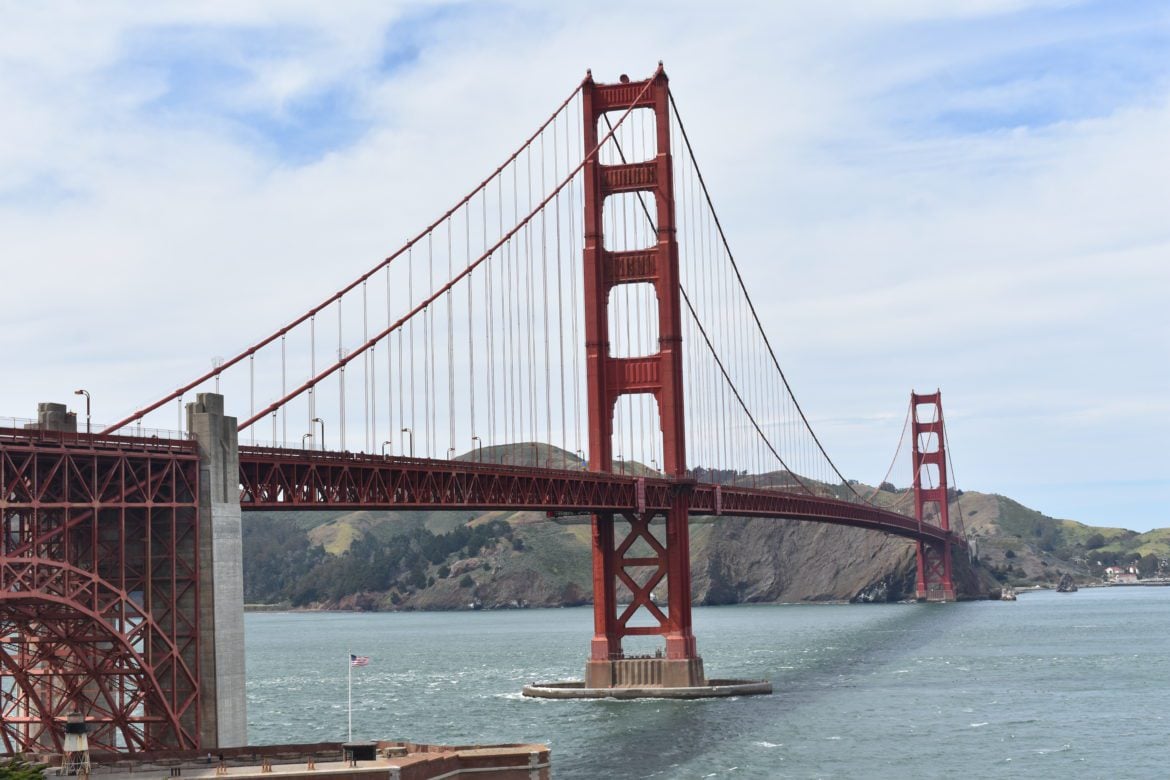 Why spend a long weekend in San Francisco?

As a bustling city with so much to offer, San Francisco cannot be fully explored in a week, a year, or perhaps even a lifetime. Though a long weekend is a great start, providing just enough time to scratch the surface and cover some of the best things to do. In this travel guide, I’ll highlight the top sights and tourist attractions that you’ll want to see in San Francisco in 3 days.

Known for its world-class tourist attractions, spacious urban parks, and sensational seaside charm, San Francisco truly has it all. SF strikes a fine balance between scenic beauty and riveting history; making it one of America’s top destinations.

Despite the long list of things to do in San Francisco, we sought to explore the city in only 3 days. The below itinerary will help you maximize your time in SF, while shedding light on the city’s eclectic nature.  I hope that you, too, will leave your heart in San Francisco.

We flew into San Francisco on Friday night, so we could hit the ground running first thing Saturday morning. Given the enormous area we wanted to cover during our 3 days in San Francisco, we decided to first explore the city by bike. Beginning at Ocean Beach, we rode our bikes along the coastline to the scenic vantage point of Lands End Lookout. The view of the rocky cliffs overlooking the waterfront was impeccable, and well-worth the agonizing ride up the hill.

Read: 35 Most Unique Places in the US

From there, we pedaled downhill to Golden Gate Park, where we witnessed San Francisco’s international perspective on full display. The Dutch Windmill offers a picture-perfect introduction to the park. I was even lucky enough to get a picture of a biker next to it (so Holland).

From there, we intensely rode eastward past the Bison Paddock and picnic areas to our next stop: the Japanese Tea Garden. If it weren’t for all the English-speaking tourists around us, I would have thought we were in an idyllic Japanese village. The Japanese Tea Garden is comprised of scenic walkways, structures, and plants that strikingly resemble Japan. The gentle streams and pristine atmosphere make this garden a must-see in the heart of the Golden Gate Park.

After biking several miles within the 1,000-acre Golden Gate Park, we ventured towards the city center on foot. We then decided to make our way to the iconic Painted Ladies, which are nearly 2 miles away. The walk flew by, and we were pleased to see the magnificent St. Ignatius Church and University of San Francisco campus along the way. As one of San Francisco’s largest churches, St. Ignatius exhibits an intriguing mix of Italian Renaissance and Baroque architecture that mesmerizes and dwarfs those who stand beside it.

Upon arriving at Alamo Square, it immediately became clear why Full House chose the Painted Ladies for their opening credits. Perched high above the city, this row of colorful houses offers scenic views of the San Francisco skyline. Thankfully, these Victorian and Edwardian homes survived the notorious 1906 earthquake, and now stand as a focal point between two parallel worlds.

After having a mid-afternoon picnic in Alamo Square, we made our way downhill towards Japantown for dinner, capping off what was an extraordinary first day in San Francisco.

READ: 19 Coolest Airbnbs in the US

Day 2: Paradise at the Presidio

We began our second day strolling around our hotel in Union Square. This public plaza is home to an array of shops, restaurants, and galleries. We then ventured to Chinatown – the largest of its kind outside of Asia. For the best souvenir deals in San Francisco, I definitely recommend checking out Chinatown.

During mid-afternoon, we set out to explore the plethora of trails and vantage points within this majestic park. Interestingly, the Presidio is 1,400 acres, which is nearly 40% larger than New York City’s Central Park. Needless to say, we got lost a couple of times on our way to the Golden Gate Bridge. However, we didn’t mind one bit, given the serene landscape and breathtaking views surrounding us.

Inn at the Presidio

In addition to the remarkable wildlife surrounding the hotel, the Inn at the Presidio is also a fascinating historical site. This boutique hotel was previously part of a U.S. army base led by the revered General John J. Pershing. Prior to California becoming a U.S. state in 1850, the Presidio was a military garrison commanded by Spain and Mexico. These barracks, once part of a fortified military base, have been transformed into the charming Inn we see today.

After a long day of hiking and learning, it was great to unwind at the Inn’s complementary wine and cheese reception. A very nice touch to an already ideal stay at the Inn at the Presidio.

Spending a night at the Inn at the Presidio was the highlight of my trip to San Francisco. My only regret was not spending more time there. I can’t wait to return someday to further explore its endless trails and beautiful nature. During your visit to San Francisco, I highly recommend staying at the Inn at the Presidio to gain a unique perspective on this diverse city.

After exploring San Francisco’s parks and green-spaces, it was only fitting to make our way towards the San Francisco waterfront. We began the day at Fisherman’s Wharf, indulging in clam chowder bread bowls and artisan pastries at Boudin Bakery.

(Looking for a destination with amazing seafood, check out these weekend getaways in New England)

This bakery also has some of the best chocolate croissants I’ve ever had. We returned to the bakery multiple times on our last day in San Francisco.

It was a neat experience to stroll around Fisherman’s Wharf and see/smell the fresh catches of the day.

Aside from its delectable eateries, this seaside promenade also has the best views of Alcatraz and the San Francisco Bay. Though Alcatraz appears to be a short distance from the shore, legend has it that no prisoners successfully escaped the island – due to the treacherous waves and vicious sharks in their path.

After eating one too many sourdough bread bowls, we then headed to Pier 39, a convenient 10-minute walk away. Known for its waterfront dining and boutique shopping, Pier 39 is a must-see in San Francisco. In addition to harboring an array of restaurants and shops, Pier 39 is also home to a sea lion colony. The boisterous ensemble of sea lions are at the very end of the pier, and cannot be missed.

Once we finished eating and watching the sea lions at Pier 39, we made our way back down the pier toward Ghirardelli Square.

The Ghirardelli Factory—a historic landmark that was first opened in 1862— offers free samples of its chocolate squares. Admittedly, I walked in there more than once to properly inspect the chocolate quality and devour a hot fudge sundae.

After our intensive culinary expedition, we set off for the cable cars, which depart 5 minutes away from the square. Interestingly, San Francisco’s manual cable car system is the last of its kind in the world. Because it was off-season, we didn’t have any issues with the lines in the afternoon. However, if you’re planning to visit SF during peak season, I recommend arriving early to avoid long lines. Both the Powell/Hyde and Powell/Mason Lines offer breathtaking views of the San Francisco cityscape and Bay.

(Check out this list of the world’s most livable cities)

On our way back to the Wharf, we hopped off at the world’s “crookedest” street, Lombard Street. I’m glad the cable car dropped us off at the top, as I would not willingly make the trek up that steep hill.

Must-see places outside of San Francisco in 3 days

We spent our last night visiting Sausalito and Berkeley, where we enjoyed local craft beers and Eritrean food. Only a $15 Uber ride from the city, Sausalito was well-worth the trip to watch the sun set over the bay. If I had more than 3 days in San Francisco, I would undoubtedly spend more time in Sausalito and the nearby Redwood Park and Muir Woods.

(Looking for a day trip from San Francisco? Check out Half Moon Bay!)

Related: Why You Should Visit Half Moon Bay

During our short trip to San Francisco, we experienced the global, eclectic mix of activities and attractions. Though exploring San Francisco in 3 days was daunting, it was perfect for gaining a high-level overview of the city. From its tranquil urban parks and coastal charm, to its international cuisine and diverse community, San Francisco is truly a shining city on a (steep) hill.

READ: How to Start a Travel Blog
Related: Best Hidden Gems in the US

Oman Travel Guide in 2020: Tips and Inspiration for Your First Visit

Great post Jon! I always wanted to take a trip to CA; hopefully this will help me explore when I head over!