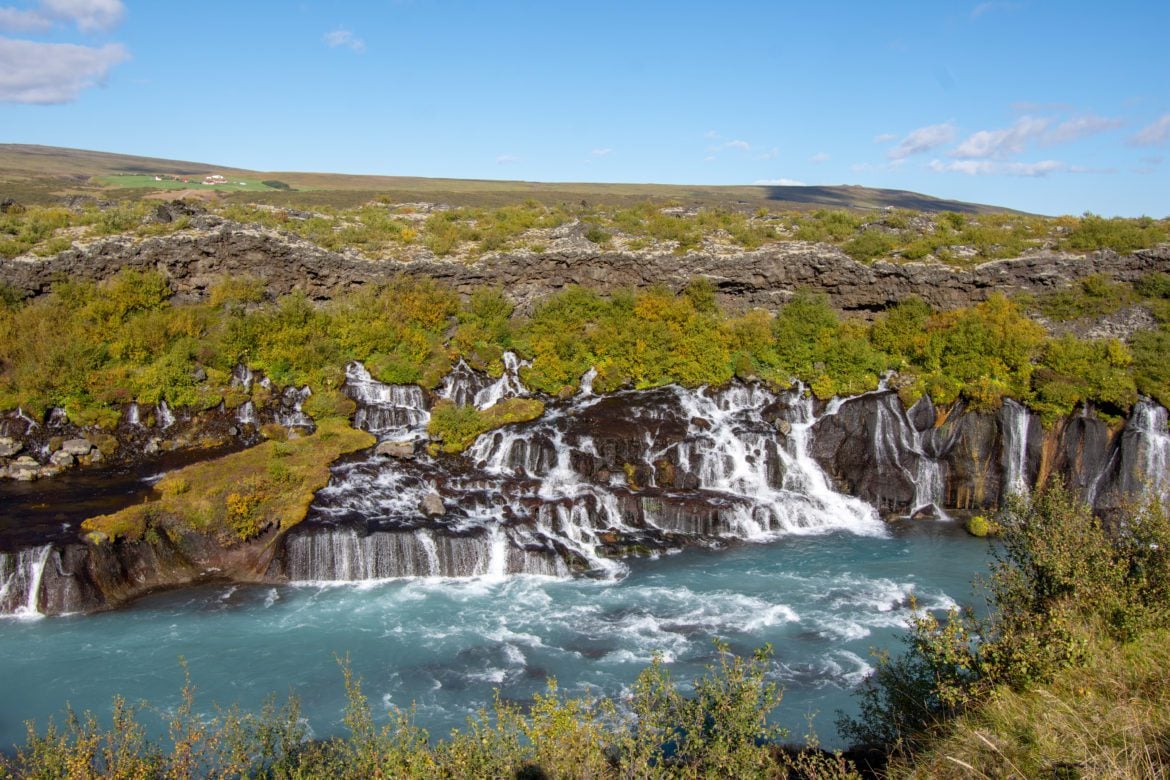 Iceland is a country brimming with magic

Known as the land of fire and ice, Iceland offers a dynamic dose of nature that cannot be found anywhere else on Earth. With its innumerable waterfalls, geysers, fjords, mountains, and glaciers, Iceland’s sheer magnitude of natural beauty is both overwhelming and awe-inspiring at the same time.

As such, this quaint island country cannot be fully explored in a day, a week, or even a year. However, I sought to experience as much as possible during my 5-day journey through Iceland.

My Wow Air flight to Reykjavik arrived at 4:45AM- just in time to catch the sunrise! When I boarded the plane, it was 80 degrees in Boston. When I landed in Iceland, it was a chilly 30 degrees. A few layers was simply not enough! As my visit occurred in early October, I can only imagine the wrath of Iceland in those frigid winter months…

From the airport, I took a shuttle bus to the rental car company down the road—called Blue Car Rental. This place had unbeatable deals- $800 for a 5-day trip in a 7-seater Mitsubishi Outlander (Iceland ain’t cheap). In Iceland— a country renowned for being one of the most expensive countries in the world—Blue Car Rental offered the best deals for new cars. In typical circumstances, I may have considered a sedan- but due to Iceland’s notorious dirt roads and rocky paths, it made sense to choose a massive SUV with all-wheel drive.

Upon arriving in Reykjavik, it was mesmerizing to watch the sun rise over the quaint seaside city. At only 120,000 people, Reykjavik is one of the tiniest capitals I’ve ever seen. At the top of the hill overlooking the city lies the Hallgrímskirkja, a contemporary Lutheran church that embodies the unique and unconventional landscape of Iceland. The church interior is comprised of a simple elegance, unlike the grandiose and gleaming appearance of other European churches. One of the highlights of the day was taking an elevator to the top of the church to admire the breathtaking views over the city.

During the day, it was exciting to explore the charming city by foot. Though Reykjavik is small and its streets can be feasibly covered in one day, there is truly so much to appreciate in this coastal capital. Reykjavik, as a relatively modern city with abundant commerce, is the perfect launch pad to begin a journey through the rest of the island.

A little past midnight began the experience of a lifetime. The aurora borealis, dancing about the midnight sky, was such a spectacular sight to witness. We trekked nearly 45 minutes south of Reykjavik to a place called Kleifarvatn, a desolate lake that sets the perfect scene for a late-night light show. I will never forget the captivating performance of green, yellow, and red lights swaying in a deliberate yet unforeseen way across the sky.

The entirety of day 2 was spent on the road—driving 3 hours from Reykjavik to Kirkjufell, and then 5 hours north to Ísafjörður in the Westfjords. The road trip was inspiring, as we encountered more waterfalls than cars and more sheep than people! The highlight of this journey was visiting Kirkjufellsfoss, a scenic waterfall with an exceptionally picturesque mountain in the background. Though Kirkjufell is a detour from the Westfjords, it was a worthwhile pit-stop to experience nature at its finest.

Read: Most Instagrammable Places in Iceland

The long drive through the Westfjords to Ísafjörður was idyllic. The winding cliff-side roads, which define the scenic Icelandic fjords, make for an adventurous expedition. Thankfully, the roads were decently paved and there wasn’t any snow during our drive to this remote region of Iceland!

We began the third day of our Iceland trip by exploring the largest city in the Westfjords— Ísafjörður. With a population of only 2,500, you can probably imagine that we did not need a full day to see it all. But the seaside port was so serene, and had some of the best seafood I’ve ever eaten. The long trek to get there was well worth it!

After leaving Ísafjörður and the Westfjords, we stopped in a northern Icelandic village called Laugarbakki. Sitting in a convenient location along the Ring Road, Laugarbakki was the perfect overnight rest stop en route to the central and southern parts of the island. We stayed at the North West Hotel, a quaint family-run accommodation that was one of the highlights of the trip. The owner was very friendly and interested in learning about the cultures and customs of his guests. The North West Hotel also offered a delicious continental breakfast that included local cuisines such as my personal favorite, smoky lamb. The breakfast was included with the room rate, which saved us at least a couple thousand Icelandic Krona (1 USD = 100 Krona).

We began the day by driving south to Hraunfossar, the most beautiful waterfall I’ve ever seen. The autumn foliage was in full swing, making Hraunfossar a picture-perfect stop on our journey down south. Interestingly, the Hraunfossar’s water did not originate from the mountains, but rather the lava beds deep within the Earth. Water from beneath the Earth seeps through lava on its passage up to the waterfall. You’ll have to see it to believe it!

(Check out the most magical places in West Iceland)

Next, we drove by Langjökull (Iceland’s second largest glacier) on our way to the Golden Circle. The rocky roads adjacent to the glacier resembled the lunar landscape- as there was no vegetation anywhere to be found. Though the rocky paths were treacherous, it was cool getting up close to a massive glacier.

The second half of the day consisted of the three heavy hitters of the Golden Circle: Þingvellir, Haukadalur, and Gullfoss.

Þingvellir National Park was such a scenic destination—known for its unique geological formations and authentic natural beauty. The site is so captivating that the Vikings chose this spot as a meeting place when they arrived in Iceland in the 10th century to create the world’s oldest parliament. Since 2004, Þingvellir National Park has been a UNESCO World Heritage Site– well deserved!

After Þingvellir, we drove down the road another 40 miles to reach the Haukadalur geothermal area. Its two famous geysers are called Geysir and Strokkur. Though Geysir no longer erupts, Strokkur launches water over 100 feet in the air every 5-10 minutes. Strokkur reminded me why Iceland is called the Land of Fire and Ice!

Before sunset, we had just enough time to check out Gullfoss. This iconic waterfall is one of the largest and most majestic in Iceland. The power of the falls was so profound and intense—I noticed a lot of parallels to Niagara Falls in the U.S. After a long day of driving and sightseeing, Gullfoss was the perfect place to enjoy nature’s untouched beauty.

Our last day in Iceland was a bit more subdued—characterized by a visit to Skógafoss and the Blue Lagoon prior to returning to the airport. Like the rest of Iceland’s waterfalls, Skógafoss is an awe-inspiring sight. On a sunny day, Skógafoss emits a rainbow that perfectly fits into the scene of the rushing and misty falls. A truly stunning and scenic place in southern Iceland!

To wrap up this magical trip, we made our way westward to the globally renowned Blue Lagoon. We bought our tickets over a week in advance, knowing that they sell out rather quickly! The Blue Lagoon geothermal spa surely did not disappoint.

The warm natural water, rich in minerals such as sulfur and silica, makes for a soothing and relaxing spa experience. National Geographic even considers it one of the 25 wonders of the world. The extraordinary outdoor bath also has a swim-up bar, where you can enjoy a cold drink while soaking in the oasis around you.

The lagoon provides silica mud and algae masks, which are allegedly good for the skin, but at the very least, they make for a goofy photo opportunity.

The Blue Lagoon was truly an unforgettable end to a perfect vacation. Though we did not get to explore everything that Iceland has to offer, we have plenty of reasons to return. Iceland—thank you for your hospitality and natural wonders, and for making this trip such a memorable experience.

To follow my journey through Europe and around the world, feel free to connect with me on Instagram: @Global.Viewpoint!

READ: How to Start a Travel Blog

Why You Should Learn Another Language in the 21st Century!

Making the Most of Canada in the Cold ❄

Best Things to Do on the Costa del...

A wonderful report on a place I have wanted to travel to for a long time! Lots of great tips and information! Thank you! Well done.

What a wonderful, inspiring trip! I hope I can come back to Iceland and enjoy these beautiful spots. And you saw the Aurora, you lucky guys!