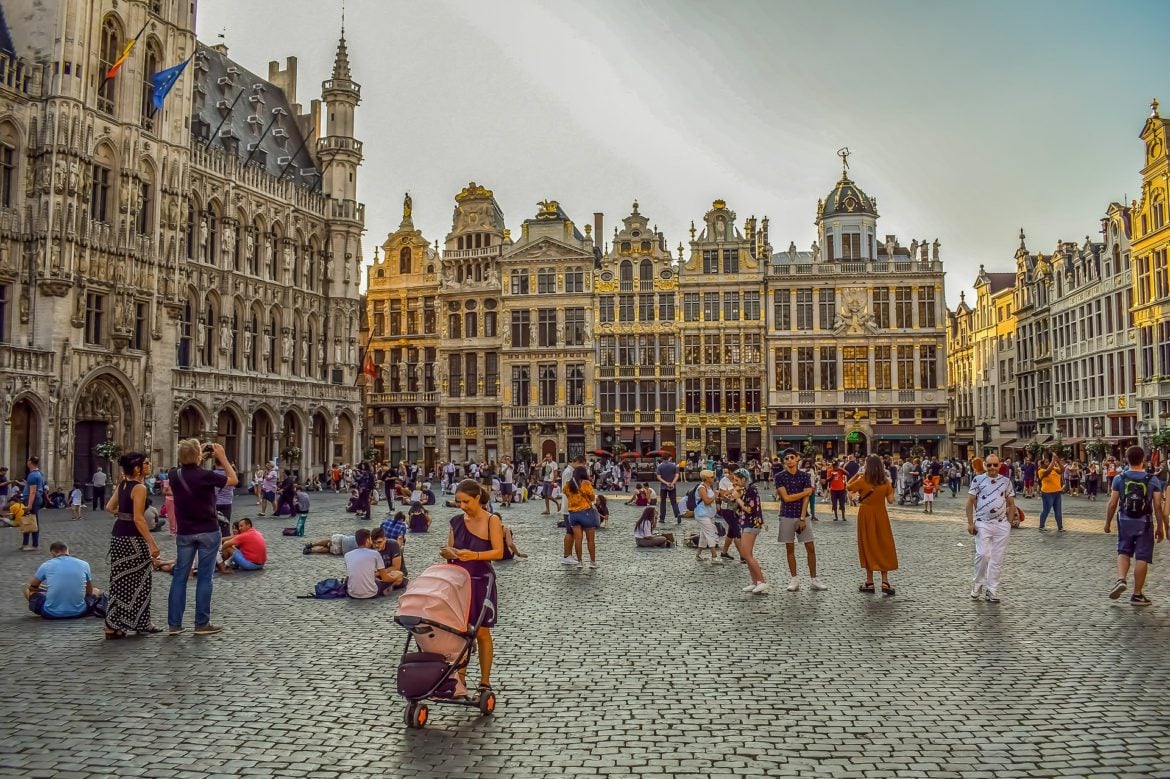 Most beautiful squares in Europe to visit

What’s not to love about Europe? Rich in history, architecture, and culture, Europe is full of beauty just waiting to be explored. A charming European city would not be complete without a magnificent square, plaza, piazza, place, or platz in its center. Having visited 25 countries in Europe, I have been lucky to experience many of its enchanting Old Towns firsthand. Based on my travels across this continent, I have put together a list of the 15 best and most beautiful squares in Europe!

Located in the heart of Rome, Piazza Navona is easily one of the most famous squares in Europe. It dates back to Roman times nearly 2,000 years ago, and was since rebuilt in the 15th century.

Today, this beautiful square in Europe is filled with fountains, baroque buildings, quaint cafés, street performers, and more. This makes it an exciting alfresco scene during all times of the day.

This beautiful square in Lisbon definitely deserves a spot on your bucket list.

Praça do Comércio, or “Commerce Square” in English, is one of the most iconic sights in Lisbon. It’s one of the most famous squares in Europe that lies along the waterfront, making it both unique and picturesque. The square is lined with beautiful 18th-century buildings, all draped in yellow. It’s funny that back in the 1980s, this square was used as a parking lot. Glad that Lisbon found a better use for this prime real estate!

This is one of the best squares in Europe due to its vibrant architecture and old world charm. It was constructed in the early 1600s as the center of Old Madrid. The Plaza Mayor is only a few blocks away from another notable plaza, the Puerta del Sol.

This bustling public space in the heart of Madrid is definitely among the most beautiful squares in Europe.

Trafalgar Square is another beautiful square in Europe that you should add to your bucket list. It was completed in 1840 to commemorate the Battle of Trafalgar, a naval victory by the British fleet over Napoleon.

Today, Trafalgar Square, one of the best squares in Europe, is a lively place that’s especially popular during gatherings and political demonstrations.

This has to be one of the best and most beautiful squares in Europe.

Located in the heart of Moscow, Red Square is one of the top attractions in Moscow and Russia as a whole. This iconic landmark is often use to portray the Kremlin, as it separates this royal building from the historic merchant quarter of the city (Kitai-gorod).

The most noteworthy sight in this square is Saint Basil’s Cathedral, undoubtedly one of the most unique churches in Europe.

It’s easy to feel inspired and lose yourself when you’re standing in Saint Peter’s Square.

Built in 1667, St. Peter’s Square sits in front of St. Peter’s Basilica, one of the holiest Catholic sites in the world. The square and basilica are named after St. Peter, one of Jesus Christ’s apostles who was considered to be the first Pope.

Trinity Square (Szentháromság tér) is definitely among the best squares in Europe. It’s also lesser known compared to the other squares on this list!

Located in the heart of Budapest, Trinity Square is a must-see. It’s filled with historical buildings and monuments, including Matthias Church, Buda Castle, and the Fishermen’s Bastion. There’s also an iconic statue that pays tribute to the victims of the 1691 bubonic plague.

With beautiful architecture and stunning views of the Danube River, this is easily one of the best squares in Europe.

The lively and pedestrian-friendly Marienplatz has been the main city square in Munich since 1158. Surrounded by the Neues Rathaus (“New City Hall”) and Altes Rathaus (“Old City Hall”), Munich’s Marienplatz is the best place to begin your sightseeing. Three times each day, the Glockenspiel comes to life with chiming bells and dancing figurines – an eye-popping experience that can’t be missed!

Is this one of the top European squares? Absolutely!

Council Square (Piața Sfatului) is nestled in the heart of Brașov’s historic center. It’s been a main market square since the 1300s, so you’ll see many historic buildings and monuments sprawled around the square. What I like most about it is the colorful architecture! The sight of vibrant buildings, including Gothic, Renaissance, and Baroque structures, will definitely put you in a cheery mood.

This hidden gem in Eastern Europe merits a visit, especially if you’re looking for a place off the beaten path. Brașov Square may not be one of the most famous squares in Europe, but it’s certainly among the most beautiful!

Read next: Top Hidden Gems in Europe to Visit in 2021

Named after its 11th century Basilica, the Piazza San Marco (“St. Mark’s Square”) is the heart and soul of Venice. Surrounded by beautiful architecture and monuments, this scenic square is a popular center for locals and tourists alike. The Piazza San Marco truly embodies the serenissima (“most serene”) qualities of Venice and Italy, and is definitely one of the most beautiful squares in Europe.

Planning to travel anytime soon? Subscribe to my email list for exclusive travel tips, hacks, and other resources to save time and money!

The Grand-Place (“Great Square”) is the most extravagant site in Brussels and one of the most beautiful squares in Europe. Its rich, adorned architecture is emblematic of Brussels as a cultural and political powerhouse in Europe. I was lucky to visit Brussels during Christmas time, when the entire square was illuminated in brilliant, vibrant colors!

Tracing back to the 12th century, Prague’s Old Town Square is a magnificent display of medieval architecture. Dominated by its Old Town Hall, Astronomical Clock, and Týn Church, this medieval square is a must-see in the heart of Central Europe! It’s top among the best public squares in Europe.

A visit to Prague’s Old Town Square won’t disappoint! You’ll quickly see why it’s among the prettiest cities in Europe!

Read next: Beautiful Cities to Visit in Europe in 2021

Kraków’s historic center, Rynek Główny (“Main Market Square”), is the largest medieval and one of the most beautiful squares in Europe. With its Cloth Hall and St. Mary’s Basilica, this magical marketplace contains an eclectic mix of Renaissance, Gothic, and Baroque architecture. Within Kraków’s medieval square, you will find a plethora of horse-drawn carriages that bring the Main Market Square to life!

Read next: Most Budget-Friendly Cities in Europe

Unlike the other squares on this list, the Plaza de España is a modern architectural wonder. Built for the Ibero-American Exposition of 1929, the Plaza de España embodies the Renaissance and Moorish styles that are prevalent in Andalusia’s history. Though contemporary in nature, this magnificent plaza will make you feel as if you’re back in Spain’s colonial times. As such, it’s definitely one of the most beautiful squares in Europe.

Read next: Most Scenic Sights in Spain

I hope you have enjoyed reading this list of the 15 most beautiful squares in Europe!

Are you looking to kick off 2021 by discovering some of the most beautiful cities in Europe? If so, I recommend checking out my recent blog posts about Barcelona and Verona:

Things to See + Do in Heidelberg, Germany: The Quintessential German Town

Ancient Athens in 45,000 Steps: What to See in this Historic City

10 Reasons to Take an Ireland Tour with...

Westport, Ireland in a Weekend: Things to Do...