Westport, Ireland in a Weekend: Things to Do & Tips in County Mayo 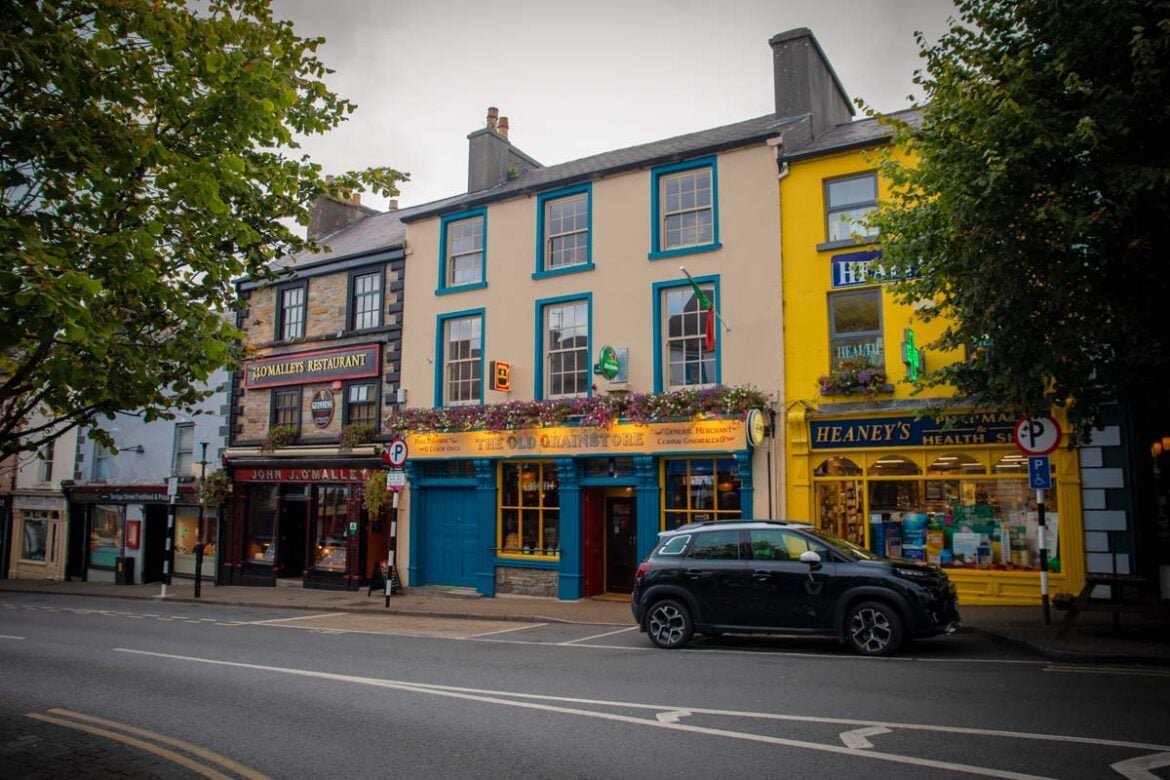 Looking to discover the best of Western Ireland? Add Westport to your bucket list. This charming town in County Mayo is brimming with gorgeous scenery and unique cultural attractions. So, it’s no wonder thousands of visitors a year come here from far and wide. While you could easily spend weeks exploring this wild side of Ireland, I recommend seeing Westport in a weekend. Read on to find out why!

Located on the west coast of Ireland, Westport is definitely worth visiting. It’s the quintessential Irish town – offering a dose of nature, culture, history, and (fitting for Ireland) a lively and authentic pub scene. A gorgeous river flows through town with tree-lined promenades and cafés on both sides. It’s just a stone’s throw away from the Atlantic Ocean and Ireland’s most sacred mountain, Croagh Patrick. However, it’s the local way of living that draws people to Westport over other destinations.

Though this Georgian town is small, it packs a punch with so many fun things to do in Westport. I recently spent 48 hours here during a guided tour with Globus Journeys, where I got to explore the city center and surrounding areas. This was one of Globus’ Choice Tours, which combines typical touring with a more local, immersive experience. It was a fun and hassle-free way of traveling, and it brought me to amazing places that I likely wouldn’t have seen otherwise.

Ready to soak in the beauty and timeless charm of Westport? Here’s my guide to visiting Westport in a weekend.

Drive along the Wild Atlantic Way

When you’re visiting Westport and Western Ireland (in general), the star of the show is undoubtedly the Wild Atlantic Way.

This driving route spans 1,500 miles (2,500 km) along Ireland’s western coastline, offering unbeatable views of rugged cliffs, sandy beaches, lush mountains, and lots of sheep. It brings you past Westport, where many visitors grab a bite to eat and a pint before continuing up the coast. However, I think you’ll want to spend at least a couple of nights in Westport to get a proper feel for the area.

During my tour with Globus, we drove through several parts of the Wild Atlantic Way. The dramatic sea cliffs paired with the winding roads and grazing sheep made this a magical journey. I’ve done many beautiful coastal drives, including the Pacific Coast Highway in California and Road to Hana in Maui, and I think this one is the wildest of them all.

If you’re looking for epic coastal views, don’t miss the Wild Atlantic Way during a visit to Westport.

Visit the beaches and sea cliffs of Achill Island

As the largest of the Emerald Isles, Achill Island is a must-see destination near Westport. It’s home to soaring sea cliffs, secluded beaches, and a variety of flora and fauna. The landscapes are vibrant and verdant, making the scene totally unforgettable.

Achill Island is the crown jewel of Ireland’s Wild Atlantic Way. My favorite spot was Keem Bay with its rugged coastline and crystal-clear waters. On a clear day, it’s a great place for swimming and watersports, including surfing, kitesurfing, and windsurfing. The weather during our visit was typical for Ireland – cloudy, rainy, and windy, which made the waves all the more powerful and unrelenting as they battered the shoreline.

Achill Island is connected to the mainland by a bridge, so it’s easy to get there from Westport. Given the island’s sheer size, we spent the better part of a day exploring it. An itinerary of Westport in County Mayo wouldn’t be complete without it!

Where to stay in Westport, Ireland?

During my trip with Globus Journeys, I stayed at the Westport Plaza Hotel, which is conveniently located near the Westport town centre. I loved the breakfast and dinner here, in addition to the amenities like the spa and fitness center. The staff was also super friendly and the room was modern and cozy. Highly recommend!

Looking for a home base in this quaint Georgian town? Here are some of the best stays in Westport:

As part of Globus’ Choice Touring excursions, some members of our tour group had the opportunity to bike along the Great Western Greenway and swore by it! At 42 km long, it’s the longest greenway in Ireland and a great place for a scenic stroll or bike ride. And of course, there’s no shortage of cafés and pubs to visit along the way.

Formerly an old railway line, these tracks have been converted into a greenway. It takes you past the best of the Irish countryside, including farms, mountains, rivers, coastline, and villages. From Achill Island, you can cycle all the way to Westport or to the charming towns of Mulranny and Newport. It’s truly one of the most picturesque stretches imaginable, which is why you should consider it while in Westport IR.

Unlike in other European countries, where cities are built around cathedrals, life in Ireland tends to center around pubs. Westport is no different.

When visiting Westport, don’t miss the chance to crawl around the local pubs and enjoy pints of the black stuff. With dozens of pubs in and around Westport, there’s no shortage of venues for traditional Irish music and local banter. My favorite pub is The Porter House, which is in the heart of Westport’s town center. The live music and cozy pub décor were super inviting and I’d recommend it to anyone.

Another traditional bar in Westport is JJ O’Malleys. In addition to the beer and entertainment, the food here is simply amazing. Stop by on Friday or Saturday to experience the vibrant live music scene and any other night for a taste of its menu, which covers Irish, European, and American cuisines.

The best way to experience life in Ireland is through its pub scene, and Westport is certainly top of the line. I’m so glad Globus gave us ample downtime to explore the town and experience its traditional pubs and live music.

Hike to the top of Croagh Patrick, Ireland’s holiest mountain

Overlooking Westport and the surrounding bay is Croagh Patrick, the most famous mountain in Ireland. At 2,500 ft. (764 m) tall, it’s one of the highest mountains in the country and it definitely belongs on your Westport IR itinerary.

For centuries, Croagh Patrick has been a popular pilgrimage site. In 441 AD, St. Patrick spent 40 days praying and fasting on its peak attempting to convert Ireland to Christianity. It’s steeped in history, religion, and mythology, which is why so many Irish catholics make the trek to the top each year.

The main trail up to the mountain peak is 7 kilometers, which takes roughly 3-4 hours to climb. And once you get to the top, you’ll have stunning views of the western coastline and many islands in the distance. It’s no wonder, then, that this is a top place to visit near Westport.

At nearly 400 years old, the Westport House is one of the top historic sites in all of Ireland. It’s the perfect rainy day activity, offering 30 rooms and 6 exhibitions showcasing the heritage of this private estate.

Take a private tour of the grounds, which includes formal rooms and artwork inside the house as well as gardens outside. The property is set on 400 acres of beautiful forest scenery, giving you a taste of life at country houses in centuries past.

In addition to the historical and cultural sides of this residence, Westport House is also home to Pirate Adventure Spot, a theme park for children of all ages. With so much to see and do around the property, it’s no wonder the Westport House is among the best things to do in Westport.

Soak in the panoramic views of Clew Bay

Only a jump, skip, and a hop away from Westport’s town center, Clew Bay is another place not to be missed on a Westport itinerary. It’s home to 365 islands, which can be seen from Croagh Patrick and many other mountains of North Mayo. John Lennon owned one of them, which he planned to turn into a retreat center. Though it didn’t come to fruition, there’s still a whole lot to see in Clew Bay.

The largest and most famous among these islands is Clare Island, which is one of only six inhabited islands. It’s accessible year-round by the Clare Island Ferry and is home to Gráinne O’Malley, a 15th-century pirate queen who is well-known in Irish history and folklore.

For beautiful ocean views, coastal hiking trails, and sandy beaches, be sure to check out Clew Bay in County Mayo. You won’t regret it!

Last but certainly not least on this guide to spending a weekend in Westport is the obvious: strolling this small town. With so much scenic beauty and charm, Westport is a place where you’ll want to take it slow and be present.

From the live music at the pubs to the tree-lined promenade on the river, it’s a great place for a stroll any time of year. Grab an Irish coffee at a riverfront café and marvel at the colorful buildings sprawled around town. It’s easy to see why Westport is such a livable town and a great place to visit.

Here are some FAQs about the magnificent town of Westport in County Mayo.

What makes Westport tourism so special?

Westport is known for its quaint downtown and proximity to many natural treasures, including Achill Island and Croagh Patrick. The food and pub scene are among the best in the region and there are countless outdoor attractions in Westport any time of year. Moreover, it’s been consistently rated the “best place to live in Ireland” by The Irish Times.

What county is Westport in?

Westport is located in County Mayo, which is on the western side of Ireland. It straddles the Atlantic Ocean with views of Clew Bay and Clare Island.

What is the population of Westport, Ireland?

According to the 2021 Census by the Central Statistics Office, Westport has a population of 6,198. Roughly 40% of the people here can speak the native Irish language.

Where is Westport Ireland?

Westport is located on Ireland’s western coast, not far from Castlebar and Galway. It’s just a stone’s throw away from Croagh Patrick, Ireland’s holiest mountain, and Clew Bay.

How do you get from Westport to Galway?

Galway is just 50 miles (80 km) south of Westport, which takes just over an hour by car, bus, or taxi.

How do you get from Dublin to Westport Ireland?

Westport is 155 miles (250 km) west of Dublin, which is a three-hour drive with no traffic.

What are the best cities and towns in County Mayo, Ireland?

What are some Westport activities this weekend?

Every weekend you can enjoy live music at many of the pubs in Westport’s town centre. The traditional Irish music is second to none and it goes late into the night. Don’t miss it!

Hope you enjoyed reading about all the things to do in Westport, Ireland. Have you visited this charming Georgian town? Have you fallen in love with the plethora of Westport activities in and around the town? Let me know on Insta or in the comments below!

Best Things to Do in Rhode Island: 12 Essential RI Attractions

10 Reasons to Take an Ireland Tour with Globus Journeys